It is not easy to write a farewell for a friend who left. I used to call him ‘Professor’, as many other people did, even when we became friends. Our relationship was, initially, distant, professional and hierarchical, but over time it became friendship and perhaps even affection.
The entire Italian community of Applied Earth Sciences owes him gratitude for having introduced this science to the academic, research and professional world and for having established in Italy, with other friends, the first cell of the International Association of Engineering Geology (IAEG), of which he was one of the first presidents.
In the academic world he was an authority, feared and respected, he was an active consultant and appreciated by many public institutions as well as private companies. He left a constructive mark everywhere.
He was multifaceted with deep interests in art and culture. He loved the theatre, the music, of which he had a rich collection of records, and a great passion for the collection of archaeological finds.
I don’t want to dwell in his Biography that is rich in projects and achievements, but for those who want to remember some moments of his life that he shared, I enclose this link: http://www.cotecchia.associates/team/cotecchia
We have lost a great scientist, a skilled manager and a friend, as many of us have considered him over the years.
Giorgio Lollino 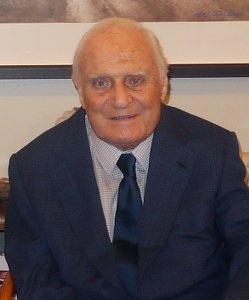 Vincenzo Cotecchia is an engineer geologist who has applied naturalistic, geo-structural, geo-morphological, petrographic and geo-mechanics methods and know-how to Engineering objectives in scientific research, teaching and high-level professional activity. A pioneer of Engineering Geology in Italy, he has fostered its advance throughout his long career as a teacher and drawn the attention of geologists and engineers to the most topical themes of Engineering Geology in countless, prestigious scientific meetings.

Under his masterly scientific direction, twelve of his assistant lecturers have been promoted full and associate professors of Engineering Geology and Geotechnics in many Italian Universities. Thanks to his energetic commitment, many young researchers have joined the Institute which has been connected with applications of Advanced Technologies in the Field of Hydrogeology, Study Centre (CSATAI) and the “Water Resources and Land Instability Research Centre (CERIST) ” of the Italian National Research Council (CNR).

In 1972 Vincenzo Cotecchia was one of the foundation members and first chairman of the Italian Group of the International Association of Engineering Geology (IAEG), he unremittingly promotes. He has successfully organised many conferences and symposia, namely the IAEG International Symposium on “Engineering Geology problems in seismic areas”, held in Bari in 1986.

Prolific author, he has published more than 300 scientific papers. He is the founder, editor and leading spirit of the Journal “Engineering Geology and Hydrogeology” published by the Italian National Research Council since 1986.

He plays a vital role in many national and international commissions. He has been entrusted with key ministerial charges, namely to the Higher Council of Public Works and the Scientific Committee of the National Geological Survey. He is a delegate of the Ministry of University and Scientific Research within the National Committee for Soil Protection. He is the Engineering Geology expert of the Scientific Council of the “National Group for the Protection from Hydrogeological Catastrophes (GNDCI)” of the Ministry of Civil Defence. For six years he has been supervising more than 500 researchers all over Italy, within the framework of the “Landslide Phenomena” finalized project of the National Research Council.

Vincenzo Cotecchia is internationally known and respected for his scientific commitment. He is a member of the Landslide Group of IAEG. He has frequently been invited as general reporter on the occasion of conferences and simposia. To name a few: he gave the general speech on “Systematic reconnaissance, mapping and registration of slope movements” at the First IAEG Prague Symposium on Landslides, in 1976; the aforementioned general report on the occasion of the Bari IAEG Symposium on seismic areas, in 1986; and the general report at the Athens IAEG Symposium on “Engineering Geology of ancient works, monuments and historical sites”, in 1988.

Ha organized the Symposium “The Fragile Towns in Italy”, Giardini Naxos, 1995 with partecipation of IAEG and the “Engineering Geology National Group”. He also organized the GEOBEN Meeting “Geological and geotechnical aspects of the historic and cultural heritage conservation”, CNR, Turin, 2000.

He has been appointed Italian delegate of CERN and member of the UNESCO Commission and given various advice assignments for the United Nations Special Fund in the Third World. He has been the coordinator of the European Commission Research Project on the Effects of Climatic change, Neotectonic and Seismic Phenomena on Landslide Evolution.

The professional standing of the Vincenzo Cotecchia as an engineer geologist and hydrogeologist is attested by the relentless activity he has been pursuing for 50 years in Italy and all over the world –Yemen, Turkey, Togo, Saudi Arabia, Greece, Egypt, Ecuador, Perù- as a consultant or responsible for Engineering Geology issues and the design of large works as dams, tunnels, roads, highways, marine works, ecc. and for the research, the planning and the use of groundwater and, in particular, for groundwater protection against seawater intrusion. He has recently established an interesting symbiosis in his scientific investigation between Applied Earth Sciences, Engineering and Historical and Humanistic Sciences, fostering Engineering Geology advanced research aimed at the preservation of the historical heritage. In this activity ha cooperated with archeologists of well-known reputation. His professional expertise has regarded all the planning stages of the above mentioned works, from the preliminary planning, up to the economic feasibility studies.

Vincenzo Cotecchia has been awarded the André Dumont Medal, an International decennial Award of the University of Liége in 1980; the National Award for Sciences “Italy 1982” and the Gold Medal, as meritorious contributor to culture, of the Italian Ministry of University and Scientific Research. Moreover, in 1998 the French Prime Minister awarded to him the title of “Chevalier dans l’Ordre des Palmes Académiques” for the services given to French culture.

During his extensive professional carrier he had several awards among which, the most important, has been the IAEG Hans Cloos Medal, achieved in the 2004 with regards to his long carrier and consistent contributions in the field of Applied Earth Sciences.

DATE AND PLACE OF BIRTH

Professor V. Cotecchia is the author of about 300 scientific publications in the fields of Engineering Geology, Hydrogeology, Geotechnics, Environment Protection and Soil Conservation.

MAIN CONSULTING AND DESIGN ACTIVITIES IN THE FIELDS OF ENGINEERING GEOLOGY, GEOTECHNICS, HYDROLOGY AND HYDROGEOLOGY