Commission 25: Use of engineering geological models

Home/Commissions/Commission 25: Use of engineering geological models
Previous Next

Commission 25: Use of engineering geological models

Commission 25’s key objective is to develop Guidelines for the development and application of engineering geological models on projects.

Background to the Commission

C25 is one of a number of IAEG Commissions established as a result of wide-ranging discussions following the First Hans Cloos Lecture (Knill 2003) at the 9th IAEG Congress in Durban, South Africa in 2002. Baynes & Rosenbaum (2004) noted that the primary focus of these discussions was the use of models within engineering geology. In particular, do we need guidelines for the preparation of models and how should uncertainty be addressed?

Following the Torino meeting, a paper on engineering geological models was published in the Bulletin of Engineering Geology and the Environment:

A further paper was published in 2020 in the Quarterly Journal of Engineering Geology and Hydrogeology:

A second draft was prepared during the first few months of 2022 and has been edited prior to review and final editing. The final version of the Guidelines should be completed in late 2022.

The purpose of the Guidelines is to establish best practice based on the application of the technique on actual projects. It is intended that the document will provide succinct, practical, accessible and authoritative advice on the effective use of the engineering geological model (EGM). This will cover a wide range of fields, including civil engineering, mining, geohazard studies, land-use planning and environmental assessment.

The central premise is that an EGM is not simply a 2D or 3D visualisation of a data set, it is a comprehensive knowledge framework for the logical evaluation and interpretation of all the geological conditions and their engineering characteristics that are of significance to a project. Thus, the purpose of the EGM is to support the engineering decisions that are made from project inception to decommissioning.

The EGM has two main components:

Conceptual – based mainly on geological concepts and interpretations with some associated engineering concepts, that is, it uses knowledge that certain geological conditions are likely to have certain engineering characteristics. A visualisation of a conceptual component is shown below. Uncertainty in the conceptual model is due to a lack of knowledge or bias of the model developer.

(i) Advisory Clauses for the development of EGMs (Part 1). 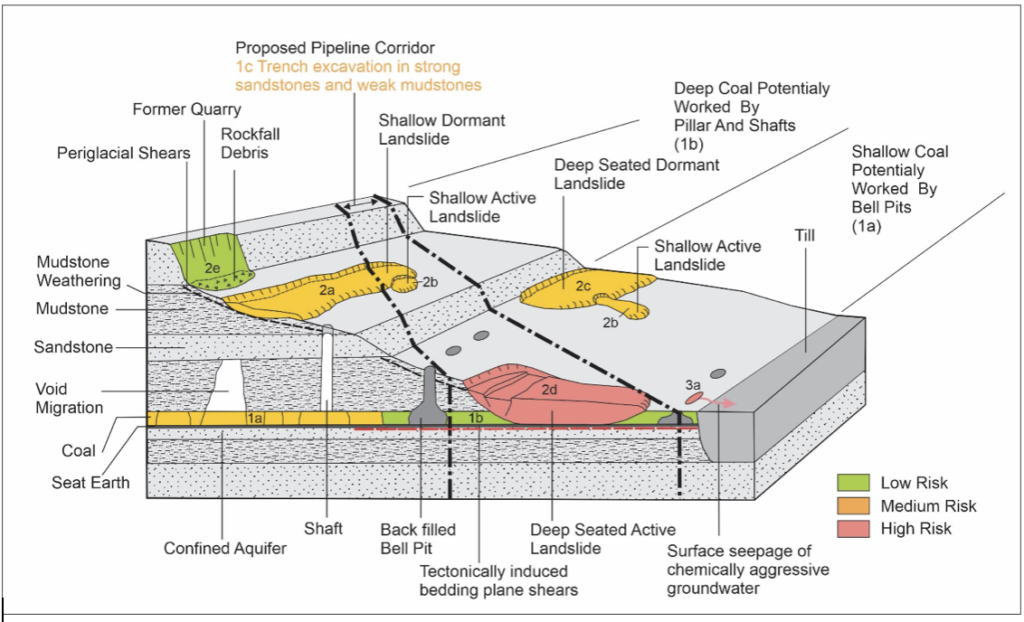 The visualisation of the conceptual component of an Engineering Geological Model (EGM) for a pipeline crossing unstable ground affected by mining (after Baynes et al. 2020)

The Guidelines will be aimed at practitioners from around the world involved in projects ranging from investigating single storey dwellings to constructing major pieces of infrastructure. The Guidelines are also relevant to the land-use planning of urban areas prior to construction.

It is hoped that once the Guidelines are completed they can be translated into a number of other languages. It is intended that National Groups will be approached to try to achieve this objective.

As the subject of the Guidelines is evolving quickly, it would be sensible for them to be reviewed every four years so that new developments can be added and improvements made.

Commission 25 would be the obvious group to lead these improvements.