Who was Hans Cloos? 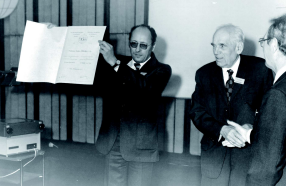 Hans Cloos was a prominent German geologist. Born in Magdeburg, Germany in 1885, Hans Cloos earned his Doctorate at Freiburg University in 1910, in which he considered the mechanism of disturbance of the Jurassic cover rocks that form the Jura mountain chain.
He then worked mapping in the Erongo Mountains of Namibia and as an exploration geologist in quite different terrain in Indonesia before returning to Germany and beginning a lectureship at the University of Marburg until the start of the First World War. During the war he worked as a military geologist in France until being released due to ill-health. Following the war, he began a study of plutons and their interior structure and in 1919 became Professor of Geology at the University of Breslau at the age of 34.
In 1925 he left Breslau to become Head of the Department of Geology at the University of Bonn where he spent the remainder of his career.
Cloos travelled widely, carrying out geological studies in the Sierra Nevada (USA), Scandinavia, England and Germany. These travels and his work are described in his book “Conversation with the Earth” (1954), originally published in 1947. His death in 1951 was commemorated in Bulletin 13 of the IAEG. Throughout his life, Hans Cloos was known for his expressive words and detailed drawings and his devotion to the physical sciences, but also for the value he placed on human relationships, which he rated higher than anything else. He readily attracted friends and co-workers across the world and because of this combination of characteristics he was selected to be a role model for the IAEG and for future engineering geologists.

A brief history of the Hans Cloos Medal

In Sydney in 1976, in accordance with a proposal made by Richard Wolters, the IAEG council agreed to establish a commemorative medal, the ‘Hans Cloos Medal’, awarded to an engineering geologist of outstanding merit in commemoration of the ‘founder of geomechanics’. Richard Wolters’ vision was that the medal, “…should clearly testify that engineering geology is rooted in geology and that it is a specific offspring of this great discipline. Secondly, and with a view to the philosophy of the scientist who passed away 25 years ago, the medal should be a compass to guide the spirit within the IAEG, our work and human bonds by which we are united.”
Hans Cloos is regarded as one of the main contributors to the development of modern structural geology and geomechanics; he had a significant influence at the time. He made careful field observations and sketches of structures and lithological relationships as well as outstanding 3-dimensional interpretations of regional geological structures and landforms. He recognised the manner in which large-scale structural deformation leaves a fingerprint in the form of small-scale structures, indicating the direction and style of tectonic translation.
He conducted laboratory experiments in which large blocks of clay were progressively extended under tension and recognised that the direction of the imposed stress influenced the resulting fracture system and he applied his findings to the interpretation of field observations. He was not an engineering geologist, but he developed the precursors to practises we now take for granted, such as the practice of measuring defect orientations, classifying them and investigating and analysing the movement documented in this way to identify the ‘geomechanics’ of the rock system. As John Knill observed, he demonstrated all the key characteristics of a good engineering geologist, being an excellent field observer and recorder, relating laboratory test results to real life observations and he was able to present his findings in a 3-dimensional context.
The Hans Cloos Medal has become the most prestigious award of the IAEG on scientific grounds. The medal is conferred upon an engineering geologist who has gained international recognition and merit for their contribution to the development and advancement of engineering geology and is made every two years (at most), on the occasions of the international congress of the IAEG and of the International Geological Congress.
Leopold Muller, in response to receiving the Hans Cloos Medal in 1984 said, “The award of the Hans Cloos Medal means one of the highest praises that were awarded to me in my life”. On receiving the Hans Cloos medal in 1989 David Varnes said, “With the pride and great
honour of receiving of this medal of our Association, bearing Hans Cloos name and portrait, comes an incentive now to continue to work with his spirit. With God’s help I shall try also to live as a human being with his humanity”.
In 2002, it was agreed that the recipient of the Hans Cloos Medal should be invited to present a Hans Cloos Lecture addressing the
nominated work at the event at which he/she receives the medal. Also, the lecture would be published in the bulletin and it was hoped that the recipient would be invited to give the lecture at other venues during the following two year period.
At the council meeting of 2011, held in Moscow, the president Carlos Delgado proposed the creation of a Marcel Arnould Medal, named after the former IAEG president and honorary IAEG president; it was unanimously approved. It was proposed that the medal be awarded to an IAEG member for his/her outstanding service to the Association (for more details, please refer to chapter 16).
Until 2012, the Hans Cloos Medal had been awarded to, “an engineering geologist of outstanding merit…. a person of international repute who has made a major contribution to engineering geology in his/her written papers or to the development of engineering geology and/or the IAEG in their own area.”
With the introduction of the Marcel Arnould Medal, the intent was to separate technical merit (which would remain with the Hans Cloos Medal) from services to engineering geology (which would become the focus of the Marcel Arnould Medal). This required some adjustments to part E of the Bylaws which were agreed by the council in Beijing in 2013.